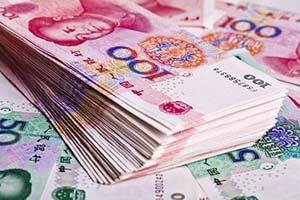 Futures for the Dow Jones today (Wednesday) forecast a 124-point decline after China surprised the global markets by announcing it will devalue the yuan, a decision that pushed the U.S. dollar higher. The world's second-largest economy continues to struggle and is looking for ways to kick-start growth. Following several rounds of rate hikes, the devaluation will likely offer a boost to its exports market but raise new concerns about a possible currency war between China and the West.

On Tuesday, the Dow Jones plunged more than 212 points after China elected to devalue its yuan currency by 2%. It's an action that could have dire consequences to the U.S. economy. It was the largest devaluation in the Chinese yuan's history. The yuan's value was cut almost 1.9% against the U.S. dollar.

According to The Wall Street Journal, the People's Bank of China (PBOC) believes this will reform the yuan's regulation and more closely align the currency with market forces. The PBOC also followed some of the International Monetary Fund's (IMF) suggestions when it came to changing the currency's regulation. Here's why that is so important…