For Aug. 12, here's how the stock market did today, earnings reports, the top stock market news, and stocks to watch based on today's market moves... 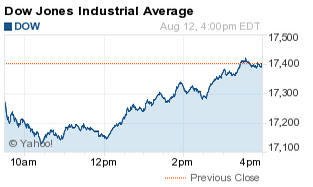 The Dow Jones Industrial Average today reversed course from an early triple-digit slump and finished only slightly down on Wednesday despite concerns about the Chinese currency devaluation. Companies with broad exposure to the Chinese economy were hit the hardest on the day.

The world's second-largest economy continues to struggle and is looking for ways to kick-start growth. Following several rounds of rate hikes, the devaluation will likely offer a boost to its exports markets, but it raises new concerns about a possible currency war between China and the West. It was the largest devaluation in the Chinese yuan's history at almost 1.9% against the U.S. dollar.

The People's Bank of China (PBOC) believes this will reform the yuan's regulation and more closely align the currency with market forces. The PBOC also followed some of the International Monetary Fund's (IMF) suggestions when it came to changing the currency's regulation. Here's why that is so important...