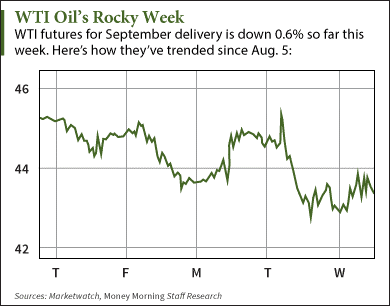 Brent crude oil prices saw even bigger gains this morning. The international benchmark jumped 1.21% to $50.31 a barrel. It's up 2.2% so far this week.

The rise in WTI crude oil prices today came after the IEA oil market report was released this morning. The agency increased its global oil demand forecast by 200,000 barrels to 1.6 million barrels a day in 2015. That number is projected to keep rising by 1.4 million barrels a day next year.

The organization stated demand will rise significantly as consumers continue to respond to low oil prices.

"Oil's plunge below $50 barrels a day from triple digits a year ago has seen demand react more swiftly than supply," the IEA oil market report said. "Against this backdrop, many participants in the oil industry have adopted a new mantra – 'lower for longer'."

Why WTI Crude Oil Prices Will Reach $76 by December

Between now and September, the number of active oil rigs will significantly shrink. That's because extraction levels from these wells peak within the first year and half they're online. After about 18 months, their output starts to significantly decline.

"Between July and September of this year, production will finally start to decline from the wells that were recently put on line," Moors explained. "Remember, these are the wells that have provided most of the excess volume."

"The translation? Eventually, the glut will recede, and the market is going to hand us some highly profitable plays in short order…"