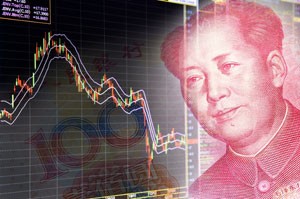 Dow futures today (Thursday) forecast a 53-point gain as European markets rallied more than 1% as investors eyed the progress of Greece's bailout program and China's attempts to stabilize its economy in the wake of its largest one-day currency devaluation since 1994. The markets hope that the yuan stabilizes after three days of devaluation against the U.S. dollar.

Yesterday, the Dow Jones Industrial Average reversed course from an early triple-digit slump and finished only slightly down on Wednesday despite concerns about the Chinese currency devaluation. Companies with broad exposure to the Chinese economy were hit the hardest on the day.