For Aug. 13, here's how the Dow Jones Industrial Average did today, earnings reports, the top stock market news, and stocks to watch based on today's market moves… 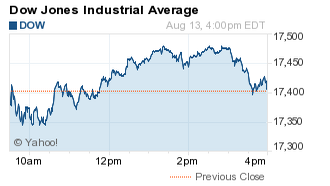 The U.S. Commerce Department reported retail sales jumped 0.6% in July, tempering concerns about June’s 0.3% decline and broader worries about the U.S. economy. Several analysts have suggested this is a sign of continued strength in the economy and could provide the U.S. Federal Reserve with greater ammunition to raise interest rates in September. Discretionary stocks rallied on the news.

Shares of Cisco Systems Inc. (Nasdaq: CSCO) offered the biggest boost to the Nasdaq and the S&P 500 after surging nearly 4% on stronger than expected quarterly earnings. It was a mixed day for retail stocks despite the uptick in aggregate spending. Today, shares of Coty Inc. (NYSE: COTY) gained 6.1% after the company beat Wall Street sales projections for the first time in five earnings reports. Meanwhile, shares of Kohl's Corp. (NYSE: KSS) dipped 8.8% after the company announced a weak second-quarter earnings report.