Until this week, a Fed rate hike at the September FOMC meeting seemed more probable by the day.

U.S. Federal Reserve Chairwoman Janet Yellen had hinted for months that the U.S. central bank finally was ready to raise interest rates above zero for the first time since late 2008. 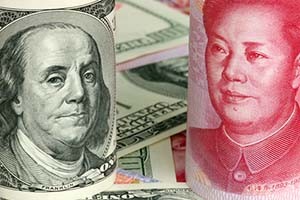 "I expect that it will be appropriate at some point later this year to take the first step to raise the federal funds rate," Yellen said in a July speech in Cleveland.

As recently as Friday, job growth numbers roughly in line with expectations bolstered sentiment that a Fed rate hike would arrive in just over a month, at the Sept. 16-17 Federal Open Market Committee meeting.

But on Tuesday, the Chinese central bank decided to loosen its grip on the yuan, essentially devaluing the currency. The yuan fell 1.9% against the U.S. dollar - its biggest one-day fall since 1994 - and since has continued to slide. In three days, the yuan has slipped more than 3% against the dollar.

That gives the Fed something else to think about. A Fed rate hike now will make life even tougher for a lot of U.S. multinationals.

There's also some irony in the fact that China's action will have an impact similar to a Fed rate hike.

Western markets promptly interpreted the move as an effort by China to prop up its economy, raising anew concerns that China's economy is weakening. In fact, Fitz-Gerald said, the move plays into China's long-term strategy to have the yuan join the world's basket of reserve currencies.

But to Western financial minds, it means China's struggling. And the perception of a weaker Chinese economy (which will result in a weaker global economy) argues against a Fed rate hike that will makes U.S. companies less competitive.

So what's a Fed chairwoman to do?

"This takes the rate hike off the table for September," Fitz-Gerald said. But with the Federal Reserve now wanting to make a move, he thinks it likely the delay will last only until the following FOMC meeting in December.

But Fitz-Gerald said the timing of the Fed rate hike is not what's really important - it's how the Fed goes about it.