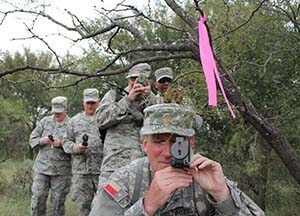 It's a question that continues to be asked both out of concern and genuine curiosity: What is Jade Helm? We've been told by military commanding personnel that it's a massive multistate training exercise designed to prepare troops for unconventional warfare.

But some folks aren't buying it. There are too many unanswered questions. Too many details left obscure. Some theorists believe the exercise is a government conspiracy to launch a hostile takeover of Texas. Others think that troops participating in the exercise are members of death squads coming to kill off "free-thinking citizens."

While some of these theories seem extreme, Texas Gov. Greg Abbott did little to quell concerns when he requested a month and a half in advance of the exercise that it be monitored by the Texas Army National Guard.

So, the National Guard was deployed to oversee Jade Helm 15 when it kicked off on July 15 in Bastrop, Texas. (The massive exercise also commenced in other states. Bastrop, however, had been the center of the Jade Helm controversy specifically because of the localized reaction there. People were full of skepticism.)

On that first day, nothing fishy appeared to happen. RawStory reported July 17 there were no visible troops and no army vehicles spotted at all. The only slight disturbance that day, reported a July 15 post on TexasTribune.com, was temporary disruption in cell connection. Amber Downing, a reporter for KVUE.com out of Austin, Texas, stated that the training was indeed underway, but on private property. City officials, Downing said, would not be releasing the details of those whereabouts.

Other than the cell phone disruption that first day, nothing substantial has since been reported. One reason for this exceptional quietude likely has to do with the fact that no journalists are allowed to observe exercises or even to talk to troops. This ordinance only served to further worry the public.

While we don't know precisely what activities are going on behind Jade Helm 15's barricades, outside the barricades is a different story...

The camp Shelby incident was a truck backfiring. Guy was arrested day of second reported shooting. 61 yr old local guy in old truck. Check local news coverage. No conspiracy there. Natl guard is not part of any fed plot. Active guys are not going to turn on citizens. We are them….they are us.

Can't take anything over when the soldiers have blanks in their guns. Seriously people, it really is training.

. . .and the government would want to "take over" (like they're not ultimately in charge right now) for what reason? Looking at Little Georgie and Rick Perry, seems all Texas has a corner on is incompetence.