Speculation about a potential Apple car again ran wild over the weekend, sparked by a report in The Guardian that the iPhone-maker had found a place where it could secretly test it.

Apple Inc. (Nasdaq: AAPL) stock got a slight lift from the rumors, rising more than 1% by mid-day today (Monday). 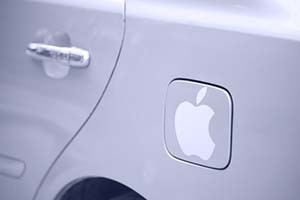 "Apple is building a self-driving car in Silicon Valley, and is scouting for secure locations in the San Francisco Bay area to test it," The Guardian declared. "Documents show the oft-rumoured Apple car project appears to be further along than many suspected."

The UK-based newspaper said that Apple is in talks with officials from GoMentum Station, a 2,100-acre former naval base in the San Francisco area. Not only does the facility have 20 miles of paved highways and streets, but public access is forbidden. It's actually guarded by the U.S. military.

In other words, it's the ideal place to test an Apple car.

The last wave of Apple car rumors came in February, highlighted by The Wall Street Journal's revelation that the Apple car project does indeed exist under the code name "Project Titan."

So it's clear Apple is working on something related to the auto industry, but unwise to assume that Apple will soon join the ranks of U.S. automakers like General Motors Co. (NYSE: GM), Ford Motor Co. (NYSE: F), and upstart Tesla Motors Inc. (Nasdaq: TSLA).

It's tempting to think a self-driving, all-electric Apple car is in the pipeline. And without a doubt, Apple has the financial resources to pull it off. But strategically, it doesn't make sense.

For one thing, car manufacturing is an extremely complex business. Starting from scratch requires hundreds of millions of dollars in capital for factories, engineering, design, tools, and certifications. And it requires a sophisticated supply chain for the thousands of parts that go into a car.

Not that AAPL couldn't swing it. But the company outsources almost all of its manufacturing now. Running an auto factory is not in Apple's DNA.