"What China has done is initiate another battle in the ongoing currency wars," Adrian Day, president of Adrian Day Asset Management in Annapolis, Md., told Bloomberg. "In these wars, there can only be one winner, which is gold." 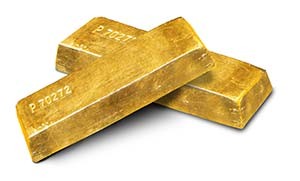 Also sending investors to "store of value" gold are increasing signs of a serious economic slowdown in China, the world's second-largest economy.

You see, other Asian countries are already feeling pain. Data Monday from Japan's Cabinet Office showed the country's gross domestic product (GDP) contracted at an annualized pace of 1.6% in the April to June period as exports shrank and consumers trimmed spending.

The dismal data suggests Japan's economy is facing a standstill. It also puts additional pressure on policymakers to further juice the economy via additional monetary or fiscal stimulus.

The world's seventh-largest economy has declined for 12 straight months, marking the longest and deepest recession in 25 years. And despite declining growth, inflation continues to surge, causing interest rates to rise. On top of all that wreckage, the Brazilian currency is down 53% over the last 12 months.

And then there's Greece. Friday's third bailout package in as many years has failed to spark confidence that the ailing Mediterranean country can recover from its deep fiscal and political fallouts.

But it isn't just global economic concerns that are sending the price of gold today higher. The Fed is playing a large role too...

Fed Minutes in Focus as Price of Gold Today Climbs

Precious metal investors are likely to proceed cautiously ahead of Wednesday's release of the FOMC minutes from last month's meeting. The wording will be scoured for any clues on the timing of the first U.S. interest rate hike since June 2006.

"Gold is successfully defying the recent increase again in Fed rate-hike expectations," says Commerzbank. "According to Fed fund futures, the market is again factoring in a 50% probability of a rate hike in September, this having dipped for a time last week to a good 30%."

Still, the U.S. Federal Reserve has pledged to move slowly with additional hikes after its first rate increase.

Also scheduled for release Wednesday is the market moving U.S. Consumer Price Index, the most widely used measure of inflation.

We recommend every diversified portfolio have a position in gold now. And these are the best ways to buy gold today...

How to Buy Gold Today