The company also lowered its full-year guidance. The Bentonville, Ark.-based company expects full-year EPS between $4.40 and $4.70. That's down from previous guidance between $4.70 and $5.05. The market consensus was $4.70. 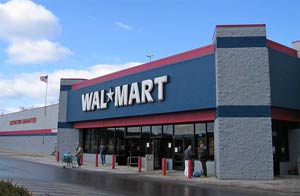 That guidance revision is the main reason the Wal-Mart stock price is falling today.

The company also said it now plans to open 160 to 170 of its smaller format stores this year, down from a previous plan for 180 to 200 stores.

The company also said its commitment to higher wages and additional hours for employees will continue to put pressure on operating profit.

In February, Wal-Mart announced it would raise employees' starting wage to $9 an hour. By next year, it is aiming for $10 an hour.

While the guidance figures are pushing WMT stock lower, there were some bright spots in WMT's Q2 earnings report.

Additionally, foot traffic in Wal-Mart's U.S. stores increased 1.3%. That helped boost sales at stores open for at least a year by 1.5%. Analysts had expected a rise of 1% and 0.06%, respectively.

Still, analysts say until earnings revisions start going up instead of down, the Wal-Mart stock price will suffer.

The Wal-Mart stock price is down 18.4% year to date, and shares now sit at a two-and-a-half year low.