I committed the equivalent of financial heresy in late December 2013 and again in January 2015 when I said Twitter Inc. (NYSE: TWTR) was a bug in search of a windshield and recommended shorting Twitter stock. The blogosphere went nuts and I was taken to task by Twitter-lievers.

...Twitter Rebounds: Here's Why You Should Be Buying Shares - Bloomberg 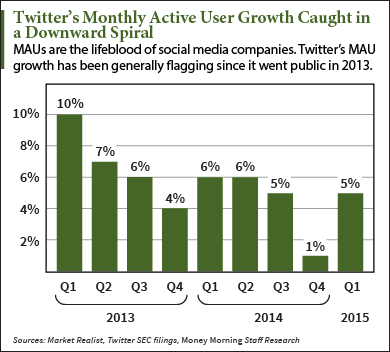 Don't buy it for a New York minute.

The company still has serious problems, and the narrative you're hearing is intended to do one thing and one thing only... separate you from your money.

We're going to talk about that today because knowing what not to buy is every bit as important a tactic as knowing what to buy.

Here's why Twitter stock is still a disaster waiting to happen.

The narrative is certainly alluring, and I don't blame you if you're tempted to think "why are insiders buying Twitter stock now?"

Wall Street's investment bankers, venture capitalists, early investors, and legions of analysts who have slapped "Buy" ratings on the stock because of the company's potential.

At the risk of sounding like a broken record, you and I have talked a lot about this and why it's so dangerous. If you've just joined us, here's the CliffsNotes version...

Potential doesn't equate to profits but, rather, a much more dangerous element - hopium - as in you "hope" that the stock goes up so another more gullible investor pays more than you did at some point in the future.

"Hopium" is the core of any Twitter bull's argument - and here is why it's still a terrible investment...