For Aug. 19, here's how the Dow Jones Industrial Average did today, earnings reports, top stock market news, and stocks to watch based on today's market moves… 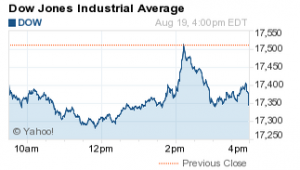 The Dow Jones Industrial Average slumped today after the release of minutes from the July Fed Open Market Committee meeting. The Dow finished down 162 points and the odds of the central bank increasing interest rates in September slipped after investors examined the U.S. Federal Reserve's meeting minutes. According to the minutes, members of the central bank said they have concerns about lagging inflation levels and weakness in the global economy. The Fed did say it only requires "some" additional improvement in the jobs sector in order to hike interest rates.

Meanwhile, the German parliament announced today it has ratified the new bailout deal for Greece. Terms of the deal will allow European creditors to inject money into the Greek economy, despite steep concerns from Chancellor Angela Merkel and her conservative coalition.