When vice presidents run for president, they don't tend to win. But they do better now than they used to…

And this table shows VPs who became president during and after the Nixon era:

VPs have fared better modernly because their roles have changed greatly since the U.S. Constitution was first drafted in 1787.

You see, before the Eisenhower/Nixon era, VPs didn't often run for president. This was because their title had little prestige and was often overshadowed by the clout of their opponents, who were recent governors, senators, and congressmen. "As it occurred, for 140 years, the primary role of the vice president was legislative and without much influence," states The Heritage Guide to the Constitution.

But Eisenhower and Nixon significantly changed the role of vice president…

In 1952, Dwight D. Eisenhower became president with his running mate, Sen. Richard M. Nixon, at his side. In his book "The Rise of the Vice Presidency," Irving Williams wrote that, as VP, Nixon "exercised greater power and responsibility in the 1953-57 term than had any of his predecessors." Indeed, Eisenhower assigned Nixon to act as a presidential liaison to Congress and representative in Republican political campaigns. Nixon also served Eisenhower as a special envoy, undertaking seven missions, during which he visited 54 countries.

When Vice Presidents Run for President: The Hard Numbers

These modern vice presidents' success rates have been 100% successful at the primary level (VPs including and after Nixon). But when it comes to VPs' electoral successes, a vice president has emerged successful in only two out of five instances, or roughly 40% of the time.

Forty percent isn't terrible, but it is still less than half. So it begs the question: Why is it hard for vice presidents to actually win the presidency? After all, who else is better qualified to take the helm next than the previous "Second in Command"?

Well, according to a March 3, 2014, article on CNN.com, vice presidents who run immediately after their tenure as VP have it rough because they're running in the wake of their predecessor's most controversial decisions…

When Vice Presidents Run for President: Biden and Gore 2016 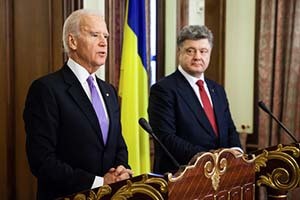 Vice President Joe Biden during a meeting with President of Ukraine Petro Poroshenko in Kiev, Nov. 21, 2014.

CNN's article focuses primarily on the likely fate of Joe Biden, should he run for president. It asserts he would likely be unsuccessful because of current U.S. President Barack Obama's low exiting approval rating, as well as the president's tendency to split parties. And this article was published well before the president's most recent acts of what some consider to be extremely contentious moves – the Iran nuclear deal, the Cuban embargo lift, his decision to confront Kenyan politicians on terrorism surges, and gay rights.

And speaking of presidential candidates who aren't officially in the race, there have been reports about former VP Al Gore throwing his hat into the 2016 presidential election ring as well. The likelihood of Gore winning the nomination, however, is unknown.

There is one factor that might boost both the former VPs' as-of-yet hypothetical bids. Perry Bacon Jr., NBC News' Senior Political Reporter, told MSNBC on Aug. 16 that Gore's and Biden's chances may improve due to present controversy surrounding Democratic frontwoman Hillary Clinton.

Bacon pointed out we're still far away from the primaries. Many factors can and will change. And while, historically, VPs have not fared well running for president immediately after their vice presidential terms, anything is possible.

Mr. and Mrs. Moneybags: Ohio Gov. John Kasich officially entered the presidential race on June 21. The Republican candidate and his family have a combined net worth of $9.1 million to $22 million. That's a big jump, isn't it? Well, there's one person responsible for Kasich's heavy pocket. Remove this person and Kasich would be like a turtle without his shell…