Greek Prime Minister Alexis Tsipras will resign later today, Aug. 20, 2015. He is expected to make an official announcement this evening, at which time he will also make his intentions for the future clear, wrote SkyNews on Aug. 20. 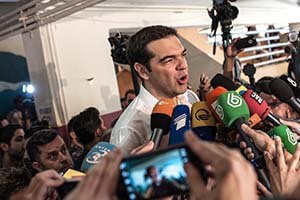 Prime Minister Alexis Tsipras in the polling station after voting for the Greek referendum, speaking to reporters in Kerkyras Kastalia street in Athens on June 5, 2015.

Tsipras was expected to initially call snap elections this morning to neutralize opposition by a leftist party in parliament and to garner support for a tough, unpopular bailout program. Snap elections are elections held earlier than expected to address urgent issues. In Greece's case, they will likely take place in September, according to USA Today.

While Tsipras' decision to call snap elections was expected, his resignation was not.

The Syriza leader had just taken office in January. Syriza, a radical-left party, gained popularity for its campaign based upon a platform of scrapping spending cuts and tax increases. However, when Tsipras took office, he did a complete 180-degree turn. He ultimately agreed to European leaders' strict austerity measures instead. After three weeks of negotiations in Athens, Tsipras managed secure a three-year package worth 86 billion euros ($95 billion).

After Alexis Tsipras has officially resigned, a "caretaker government" will be installed until the elections take place, wrote The Guardian. 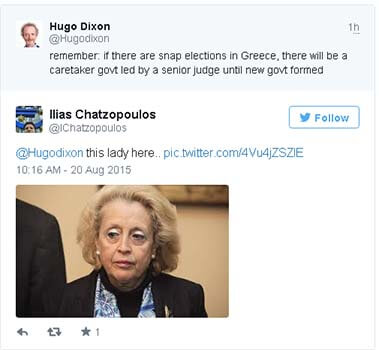 The front-runner expected to lead that administration is Vassiliki Thanou. Thanou is 65-years-old and is president of the Supreme Court of Greece.

Also today, Greece received the first 13 billion euros ($14.5 billion) from its new bailout package, allowing it to pay a debt of 3.2 billion euros to the European Central Bank (ECB).

Mr. and Mrs. Moneybags: Ohio Gov. John Kasich officially entered the presidential race on June 21. The Republican candidate and his family have a combined net worth of $9.1 million to $22 million. That's a big jump, isn't it? Well, there's one person responsible for Kasich's heavy pocket. Remove this person and Kasich would be like a turtle without his shell…