For Aug. 20, here's how the stock market did today, earnings reports, the top stock market news, and stocks to watch based on today's market moves... 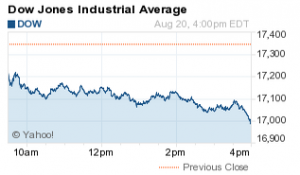 The Dow Jones Industrial Average cratered more than 358 points today, despite news U.S. home resales hit a near eight-and-a-half year high in July and Mid-Atlantic manufacturing activity gained in August. The financial sector declined more than 2% on the day after investors reduced expectations that the U.S. Federal Reserve would raise interest rates in September. Today's decline turned the Dow Jones and the S&P 500 into negative territory for the year.

Media stocks took a huge blow today after an investment research firm said the entire sector requires an evaluation of how companies should be traded and evaluated. Shares of Walt Disney Co. (NYSE: DIS) - the owner of ESPN - and Time Warner Inc. (NYSE: TWX) dipped more than 5% over concerns about cable-cutting.