Will Biden run for president? Several sources in the Democratic Party have said that Biden's advisers are making 2016 presidential election calls on his behalf, according to The Washington Post on Aug. 15.

Still, there's been no hard evidence to verify Biden's bid for the presidency. All voters have been able to do in the meantime is watch and wait.

To critics, that is. You see, the longer Biden puts off an official announcement, the more space and time he allows for his critics to mold the public opinion.

For instance, U.S. Sen. Tom Harkin (D-IA) appeared on Hardball on Aug. 17 to endorse Hillary Clinton. As to the idea of Biden running, "There is no room for Joe in the race," Sen. Harkin told Chris Matthews. "It's set. The field is set."

Harkin's sentiment is shared by 47% of fellow Democrats in the Senate, according to a Gallup poll taken Aug. 5-9. That's compared to 45% of Senate Democrats who think Biden should run…

April Ryan of American Urban Radio Networks told Chris Matthews in the same episode that Biden should run because "this is the year for non-traditional presidential campaigning." Plus, Ryan argued, Biden would be there to pick up the pieces should the Hillary Clinton email controversy explode.

Will Biden Run for President? The Pros and Cons of a Bid 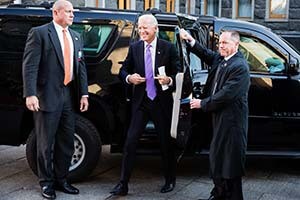 Democratic strategist Joe Trippi, manager of Howard Dean's presidential campaign in 2004, told USA Today on Aug. 16 that Biden would alter the race. It would be beneficial, Trippi argued, for both Biden and Sanders to split the establishment vote against Hillary. And like Ryan, Trippi sees the Clinton controversy as potentially explosive. He believes the public would be grateful to see a familiar face once the dust settled.

But Adolfo Franco, former Arizona Sen. John McCain campaign advisor, told Chris Matthews that a Biden bid is a bad idea. Franco reminded other members of the roundtable that the sitting vice president notoriously talks too much – and makes way too many gaffes. Gaffes like dropping f-bombs into his lapel mic one too many times. People aren't going to take him seriously, Franco warned.

Whether the public takes Biden seriously or not, one thing's for sure: The longer we're left to ask, "Will Biden run for president in 2016?" the more the pundits' opinions will pile up…

Beep Beep! Make Way! A Fruit's Comin' Through! Speculation about a potential Apple car again ran wild over the weekend of the Aug. 14. The hullabaloo was sparked by a report in The Guardian that the iPhone-maker had found a place where it could secretly test it. Wherever that place may be, however, one thing's for sure: Google's little Street View car has probably already been there…