For Aug. 21, here's how the Dow Jones Industrial Average did today, earnings reports, top stock market news, and stocks to watch based on today's market moves... 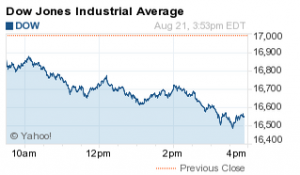 The Dow Jones Industrial Average today fell more than 3.1%, continuing the downtrend after Thursday's huge sell-off. The Dow slid 531 points, while the Nasdaq dipped another 3.5% as technology stocks slumped. Shares of Apple Inc. (Nasdaq: AAPL) continued to slide on China market woes, falling another 5.9% on the day. Apple stock is now officially in bear territory.