Ekso Bionics Holdings Inc. (OTC: EKSO) stock, our first Human Augmentation recommendation, has drifted lower in recent trading to around $1.15 a share, causing many investors to wonder if the company's "okay."

The business case is stronger than ever. The company continues to hit many of the milestones I laid out for you as being essential to building the proper base for a successful future even as key competitors, including ReWalk Robotics (NASDAQ: RWLK) and Cyberdyne Inc. (FRA: 8C4), have delivered double digit losses of 69% and 16%, respectively, over the same time frame. 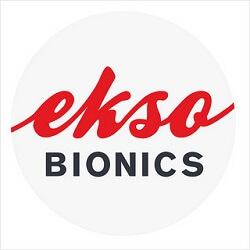 I know that's hard to imagine given that the stock hasn't taken off yet, but to paraphrase David Carradine's character in the 1972 television series, "Kung Fu," "have patience, grasshopper."

Today we're going to talk about why and, as usual, what it means for your money – including a new development that speaks volumes about why my predictions may ultimately prove conservative.

Here's why I'm still projecting gains of more than 2,000% in a few years' time for Ekso Bionics.

Last April, Winter Green Research released a report projecting the exoskeleton market to skyrocket from $16.5 million in 2014 to $2.1 billion by 2021. Chances are, you can do the math just like I can… that's a market smashing 12,627% expansion running at a compound annual growth rate of approximately 177%.

You simply don't see this kind of potential very often which is, of course, why we're focused on it.

Now most people hear those numbers and immediately think there will be room for a lot of players down the line. So there's no urgency when it comes to investing… they can always invest later, goes the thinking.

In reality though, the first players in – those with the right combination of products and the marketing savvy needed to gain an early lead and keep it – will be the winners. This isn't the Internet or a technology company that can literally be replaced at the click of a mouse.

EKSO's suits are medical devices with complicated financial linkages to insurance companies, medical treatments and, most importantly, patients that cannot be replaced at will. That means every dollar gained is not just revenue but, rather, a dollar the competition has lost. Perhaps permanently.

This is a distinction most investors miss because their emotions get the better of them. Many times they run out of patience long before the stock they're interested in has had the time to build up the profits that ultimately propel it skyward.

I bring this up because EKSO's latest earnings report (released Aug. 11) was fabulous…

Well I have decided to pay attention to your advise.

BE WILLING TO LOOSE YOUR MONEY BEFORE 2020 ARRIVES ANYTHING CAN HAPPEN IN THAT AMOUNT OF TIME. I HOPE IT DOES WELL IT'S THE REASON I'M HERE LOOKING FOR A LONG TERM STOCK TO INVEST IN. WHY ROLAND DID YOU DECIDE TO LISTEN TO HIM?