We received one of the biggest stock market crash indicators we've seen in 2015 today (Friday) when Bank of America Merrill Lynch reported that U.S. equity outflows hit a 15-week high this week.

According to the bank, more than $8.3 billion fled stock funds in the last week as global economic concerns intensified.

A stock market crash in China and continued Greek bailout concerns have sent global markets tanking this week. The Dow Jones Industrial Average has fallen more than 876 points (5%) since Tuesday's opening. The Shanghai 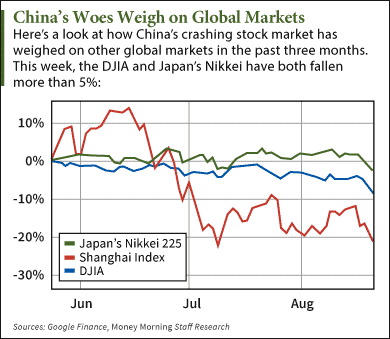 Composite Index is down 12.2% since Tuesday and nearly 32% since June. Japan's Nikkei 225 Index has also fallen 5.8% since Tuesday.

According to the BofA report, funds that focus on U.S. stocks saw outflows of more than $6.6 billion this week. That brings the 2015 total to a whopping $120 billion.

But that's not the only area that was hit hard. Money is pouring out of emerging markets too. More than $6 billion fled emerging market equity funds for the week ending Aug. 19. That was the 7th consecutive week of outflows for emerging market funds.

Most investors are taking their money and heading into safe-haven investments like precious metals. Precious metal funds saw an inflow of roughly $18 million for the week.

Bonds were also a popular investment. According to the report, more than $2.5 billion headed into funds specializing in Treasuries and government bonds.