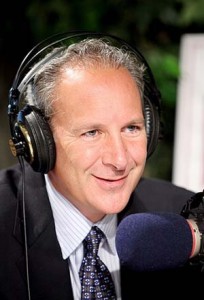 Peter Schiff, CEO of Euro Pacific Capital, runs his own podcast at schiffradio.com

"The dollar is very overvalued…and the dollar is a bubble," he told Newsmax Prime on Aug. 11. "This dollar bubble is going to burst."

Indeed, less than two weeks after Schiff's interview, the U.S. dollar index, which measures the greenback against a basket of currencies, has retreated 2.1% to 93.063 for a fourth-straight loss.

And U.S. markets are getting rocked with a major sell-off – last week finished out as the worst for stocks in four years…

The sell-off continued today (Monday). Within minutes of the first trades, the DJIA plunged 1,000 points. Stocks quickly recovered – an hour into trading, the Dow was down about 450 points, still on track for a major loss. Futures for the CBOE Volatility Index (or VIX) – a "fear gauge" index – surged 26% in early trade, above 25% for the first time since June 15, 2012. VIX futures have soared 44% over the last four sessions of last week.

Many blame the surprise China yuan devaluation for the sell-off. 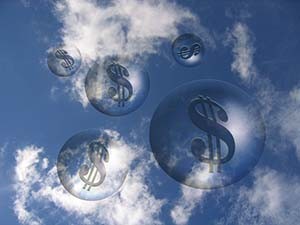 "When you look at the immediate import [the yuan devaluation] had on currencies – you get a sense as to why people are very, very frustrated with China," Jon Huntsman, former U.S. ambassador to China, told CNN on Aug. 16. [Editor's Note: For a full explanation of the Chinese currency devaluation and its effect on the dollar, click here…]

But Schiff has a completely different take.

He believes investors should be worried about the United States, not China…

"China's economy is not failing and this is a small devaluation, 2%" Schiff said. "The Chinese currency has increased in value dramatically over the past several years, along with the U.S. dollar. So this move was motivated not by the exchange rate between the yuan and the dollar, but between the yuan and all the other currencies because the dollar is in a bubble right now."
Schiff went on to say the dollar has been propped up on hype and speculation. And the U.S. Federal Reserve is to blame – not China.

Check out these tweets Schiff shot off Monday morning on the Fed and the dollar: 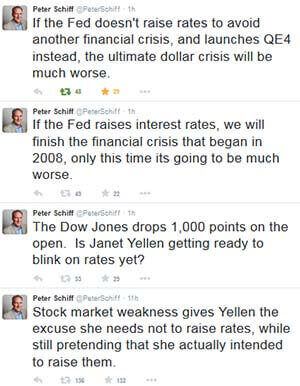 Schiff pointed out in his Newsmax interview that the United States has an enormous trade deficit with China. The goods Americans want to consume are made in China – not vice versa.

"[China's] economy is far more powerful, far more dynamic than the American economy. That's why we have these big deficits. But people believe in the myth of this U.S. economy, they believe that this bubble is genuine. They made the same mistake in the late 1990s; they made the same mistake right before the financial crisis of 2008. They're making a mistake again," Schiff said.

"We're on the verge of a much worse financial crisis than the one we went through in 2008, and it's going to take the form of a currency crisis. You're talking about currency wars. America is going to win the currency war, which is a race to the bottom, and you don't want to win a currency war because a currency war is different from most wars in that the object is to kill yourself and unfortunately, we're going to succeed."

Currency Wars: China fired a shot heard 'round the world Aug. 11, stoking fears of what could become the ugliest of all currency wars. In a surprise move, the country massively devalued the yuan 2% – its biggest one-day devaluation in 20 years. China's yuan devaluation will have more than just that immediate impact – it gives the country unprecedented, long-term control over the U.S. dollar. Here's how China has managed to place the U.S. dollar on puppet strings…