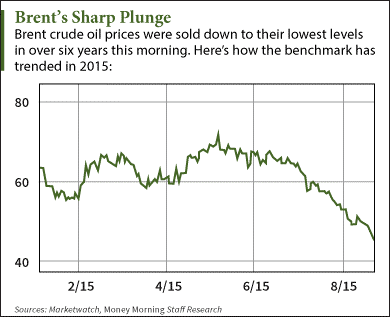 The fall in the Brent crude oil price followed China's worst single-day loss in more than eight years. The benchmark Shanghai Composite Index fell 8.5% on the day, leaving it down 0.8% in 2015 and down 38% from its mid-June peak.

Since oil is priced in U.S. dollars, imports become more expensive for Chinese consumers when the country's economy weakens. With China consuming about 12% of the world's oil, analysts assert that a collapse in the country's imports would be catastrophic for global oil prices.

There are plenty of ways to make money from that long-term picture right now. One way to find the best oil stocks to buy is to target M&A activity...

The low-price environment has primed the oil sector for a wave of mergers, resulting in a new group of heavyweight companies that will lead the market into a "new energy age."

Here's how you can identify those companies likely to benefit from restructuring...

Alex McGuire is an associate editor for Money Morning who writes about oil and natural gas. Follow him on Twitter at @AlexMcGuire92 for the biggest energy updates.

Saudis and Saudi-led OPEC Must be watching today's (Black Monday) world market plunge. If they don't stop and alter idiotic strategy of continued unrelenting oil production, their time of earthly lives and world influence will soon come to end. I can not imagine when price of oil becomes so cheap it becomes cheaper than price of bottled water, when value of oil becomes so diminished that it threatens the economic and political well-being of nations such as Russia that relies heavily on oil for national revenue and survival. Nonetheless, I seem to have finally seen the bottoming to this oil plunge.