After a month of negative talk from Wall Street analysts that helped drive Apple stock down 20%, the mood has suddenly reversed.

The gloom lifted at the oddest of times – in the midst of a stock market meltdown yesterday (Monday) that took the Dow Jones Industrial Average down more than 1,000 points at the open. 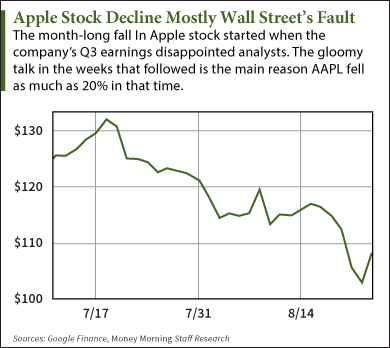 Apple Inc. (Nasdaq: AAPL) stock was among the biggest losers at that point, down more than 10% to $92 before rebounding sharply. For several hours, AAPL stock was in positive territory before ending the session off 2.5% to $103.15 – avoiding the Dow's 3.6% decline.

Apple stock almost surely would have ended Monday worse off than the overall market but for one extraordinary event. Apple CEO Tim Cook emailed CNBC host Jim Cramer to reassure him (and Wall Street) that Apple's iPhone sales in China had "accelerated over the past few weeks."

Not only did that rescue the Apple stock price yesterday, but it also ensured a strong rebound today (Tuesday). In mid-day trading, AAPL is up more than 5%, while the Dow is up just 2%.

Cook's message directly contradicted what had become conventional wisdom on Wall Street – that China's economic problems were hurting sales there, especially of the pricey iPhone.

This is one of those illustrative moments that shows why investors need to take whatever Wall Street says with a heavy dose of salt.

When Apple reported its Q3 earnings in July, it missed expectations on iPhone sales. And it failed to break out Apple Watch sales, which led many to assume the product was bombing. (Best Buy Co. Inc. (NYSE: BBY) countered that notion today when it reported strong demand for the Apple Watch. The retailer plans to expand the number of stores carrying the product to over 1,000.)

Analysts also started to fret that sales of the next version of the iPhone, due Sept. 9, will suffer in comparison to those of the iPhone 6, which have been spectacular.

As the AAPL stock price fell, the media joined the act with stories wondering whether the reversal meant that the company's glory days were over.

But that's not what we were saying here at Money Morning…