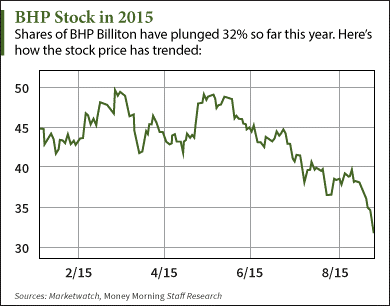 As the world's foremost producer of iron ore, coal, and steel, BHP Billiton is one of many global businesses exposed to the market chaos in China. According to financial firm UBS, the mining company relies on China for about 30% of its revenue.

Although it currently trades at a discount price of $33 a share, BHP stock is not a buy. The company's broad exposure to the volatile commodities sector makes it an extremely risky investmenat right now.

The best profit plays are in oil rather than general commodities. That's because oil prices will stabilize by the end of the year thanks to a wave of M&A among energy firms.

Here's why oil is offering strong investments now, and the two best oil stocks to buy now as the sector adjusts to the new wave of consolidation...

Alex McGuire is an associate editor for Money Morning who writes about commodity prices. Follow him on Twitter at @AlexMcGuire92 for all of the biggest commodities updates.

The reason some investors were taken by surprise on the latest marker
fall is, because they invest, when their broker recommends one stock over
another. But, if they took the time to study what is going on around the world,
they might refuse to follow the broker.
The world has become a small village and our countries are connected
by the reliance of the products they produce.
When this product commerce is being diminished, it is obvious the producer
country will suffer and their stock will go down like a rock. I recommend
the investors to study what they are buying (background and origin of Company
and product and who is using that product), that is the stability of the user.ellie