For Aug. 25, here's how the Dow Jones Industrial Average did today, earnings reports, top stock market news, and stocks to watch based on today's market moves... 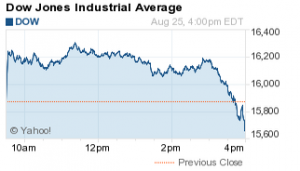 The Dow Jones Industrial Average today pared gains after a massive "Black Monday" rebound saw the market climb as many as 441.5 points. The Dow Jones Industrial Average and S&P 500 both slid into negative territory during the last 30 minutes of the trading session, one day after the Dow's worst three-day decline in its 133-year history. The Dow finished down more than 205 points on the day.

This morning, the Chinese central bank announced it had slashed interest rates and reduced the amount of money required for reserve banks to hold for the second time in just two months.

Money Morning Members: Keep reading for more on the plunge in the markets today. For those new to Money Morning, sign up to keep reading - it's completely free...