Even companies that have not yet gone public are suffering from the prospect of a full-blown stock market crash. 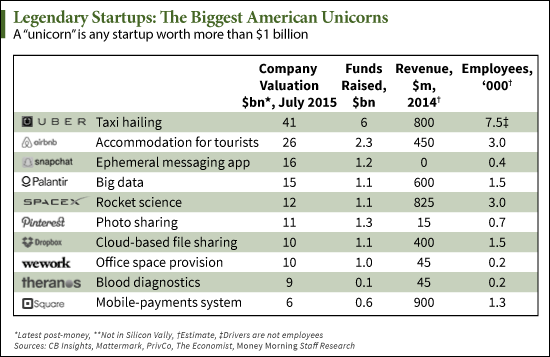 Most of these unicorns are tech companies that Money Morning Chief Investment Strategist Keith Fitz-Gerald says are particularly at risk because they've become so overvalued.

"According to The Economist, the top 10 highest-valued private equity companies are valued at $156 billion despite having revenue of only $4 billion," Fitz-Gerald said.

That makes them especially vulnerable to a stock market crash.

With the tech-heavy Nasdaq index down nearly 14% from its July highs, some venture capitalists already have begun to sound the alarm.

A Stock Market Crash in Tech Has Changed the Game

"When many venture investors are seeing their personal public portfolios tank, it creeps into their business lives and creates an emotion that is less risk tolerant, whether they're aware of it or not," Mark Suster, a partner at Upfront Ventures, wrote in a blog post.

Bill Gurley, a general partner at Silicon Valley venture capital firm Benchmark, described a more direct impact from a stock market crash in his tweetstorm on the topic on Aug. 20. Benchmark has invested in such tech startups as Zillow Group Inc. (Nasdaq: Z) and Uber, currently the biggest unicorn of them all.

"Tech stocks have been getting crushed the past six weeks. Many names are down 25%-50% from their highs," Gurley tweeted. With stock declines driving valuations lower, he predicted "an adverse impact on late-stage private market liquidity and valuation."

Gurley envisioned "the end of a cycle where growth is valued more than profitability." In other words, unicorns spending capital recklessly on growth instead of focusing on becoming profitable could be in for a rude awakening.

The frothy valuations of so many tech startups is reminiscent of the dot-com bubble days. The difference then is that a lot of those companies did have IPOs – and shortly afterward crashed and burned.

To see why venture capitalists are turning cautious, look at what's happened to the tech startups that had their IPOs earlier this year…