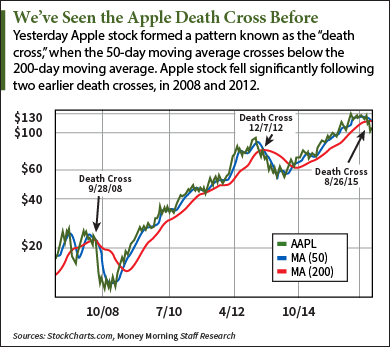 Technical analysts see a death cross as a signal that a short-term drop is about to become a long-term slump.

So what exactly is a death cross?

For example, the Dow Jones Industrial Average chart formed a death cross on Aug. 11. The Dow Jones shed 11% over the next two weeks. (That was before yesterday's dramatic 619-point increase.)

As for AAPL stock, it has seen the death cross before. The last two occasions were in 2008 and 2012.

How Apple Stock Has Fared After a Death Cross

After Apple stock formed a death cross on Sept. 23, 2008, it plunged 38% over the following four months.

More recently, Apple stock formed a death cross on Dec. 7, 2012. Over the next four months, the AAPL stock price fell 27%.