For Aug. 27, here's how the Dow Jones Industrial Average did today, earnings reports, top stock market news, and stocks to watch based on today's market moves… 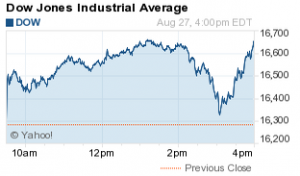 The Dow Jones Industrial Average today surged in the final 30 minutes of trading to finish up more than 369 points. Markets moved higher as a revision of second-quarter GDP showed the economy may be much stronger than previously reported and concerns over the Chinese stock market faded. The U.S. Commerce Department reported that between April and June, GDP grew at 3.7%, much higher than the 2.3% it had reported last month.

Many investors are now asking a very important question: Is this stock market correction over? Money Morning Capital Wave Strategist Shah Gilani warned on FOX Business' "Varney & Co." that the sell-off might not be over quite yet. Watch the interview here.

The S&P 500 Volatility Index (VIX), the market's fear gauge, dipped another 12.1% on the day as concerns about the broader markets faded.