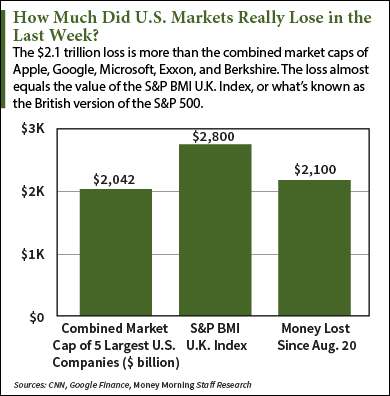 If there's one number that summarizes the stock market correction over the last week, it's $2.1 trillion.

That's the amount of money U.S. markets have lost in just the last six days.

According to CNN Money, losing $2.1 trillion is equal to erasing 75% of the British version of the S&P 500. The benchmark, called the S&P BMI UK Index, is worth a total of $2.8 trillion.

The Dow Jones Industrial Average saw the biggest losses earlier in the week. The index plummeted 1,089 points in early trading Monday. It then saw the largest one-day reversal in seven years on Tuesday, crashing 205 points in the final 30 minutes of trading after being up 117 points earlier in the day.

Although the Dow is rebounding today, Money Morning Capital Wave Strategist Shah Gilani says the sell-off might not be over quite yet.

This kind of volatility can set investors up for hefty losses. But you can still hold onto your wealth if you follow a disciplined strategy.