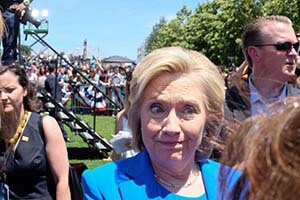 Former Secretary of State Hillary Rodham Clinton formally announced her intention to seek the 2016 Democratic nomination for president during a rally on Roosevelt Island.

In March, the 2016 presidential election hopeful's favorability was 78% among Democrats, according to The Washington Post. That number dropped to 72% by June – right around the time the email scandal heated back up, thanks to Congressional Republicans' release of 200 pages of emails that Clinton should have made public herself. Now, two months later, Clinton's Democratic favorability is down to 63%, according to Publicpolicypolling.com on Aug. 25.

As more and more damning details emerge, the less the public – even those affiliated with her party – trust her.

You see, the email scandal isn't a gaffe that can be easily looked past, explained away, and forgotten. It's more akin to a classic relationship deal-breaker – like differences of religion, or whether both partners want children, etc. – because it cuts deeply to the heart of two possibly inexcusable characteristics in a candidate.

First, this email scandal warns how the former first lady and secretary of state is capable of abusing the expanded powers afforded to the President of the United States.

Second, many voters consider Mrs. Clinton's disregard for federal rules and subsequent lack of transparency arrogant, as if to say, "I'm above the law."

The Progression of the Hillary Clinton Email Scandal 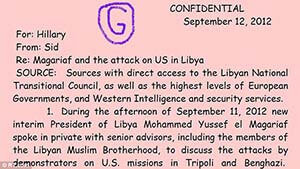 According to a March 21, 2013, report on the Situation Room, Guccifer copy and pasted the content of Blumenthal's email to Clinton on a pink background with Comic Sans font. Doing so made it harder for investigators to find meta-data that could be traced back to him.

A Single Lie Discovered Is Enough to Create Doubt in Every Truth: Even after a two-month surge by Sen. Bernie Sanders (I-Vt.), Hillary Clinton still leads in the Real Clear Politics poll average with a dominating 54.5% to Sanders' 22%. If you're surprised by her popularity, then consider her one of the best politicians in the business. Because she's told a slew of lies you might not even know about…

I think Mrs. Clinton has lost her credibility, and should drop out of the race. What bothers me more is that I would think that the federal government would have policies, practices and procedures to prevent this from happening in the first place. All kinds of rules and regulations are put on the American public and business, I was a Training Manager prior to retiring. We were required by the federal government to take many courses so our employer met the reg's. One such course was ethics and was implemented by the Sarbanes-Oxley act of 2002! Don't you feel it is a bit hypocritical that the federal government is holding businesses of honest working citizens accountable, while at the moment it appears that Mrs Clinton is going to possibly be the next President?

Drip, Drip, Drip, the controversy drags on. It won't conclude but it won't necessarily derail Hillary either. Although the Dems are worried, there is no one else on the bench. Hillary is the only brand name they have that potentially can bring home the votes ( bacon ). So, it probably will again be a Jeb Bush vs. Hillary Clinton election in Nov. 2016.

Donald Trump can continue by funding his own "campaign" but neither party wants him. A bear market now means Jeb wins. A bear market after the election means Hillary has a limited first and last term ( One Term).

Re H. Craig Bradley's posting: recent poling data does not agree with your “predictable result” that Jeb wins. For one thing, Jeb has even sunk below Fiorina in recent polls of Republican voters. And the poling data shows that Trump’s Unfavorable numbers have gone down a lot, while his Favorable numbers have increased. It is hard therefore to see how it is a predictable result that Jeb wins. If, despite all this, Jeb does win, it would have less to do with a bear market than, say, character assassination by some bad actor, or a self-inflicted wound by one of the candidates.