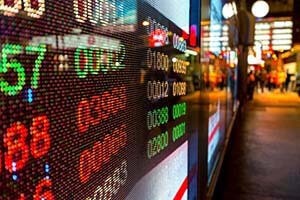 On Friday, the Dow Jones slipped more than 100 points in the final hour, but rallied just before the close. The decline came after a key official at the Federal Reserve suggested an interest rate hike in September is still possible. Vice Chair Stanley Fischer said recent economic data and developments in the markets will determine whether the central bank takes action next month to tighten monetary policy. Shares of Goldman Sachs Group Inc. (NYSE: GS) and Johnson & Johnson (NYSE: JNJ) weighed down the Dow on the day, falling 1.2% and 1.4%, respectively.