After keeping "mum" throughout most of the summer, the Donald Trump economic plan is out... 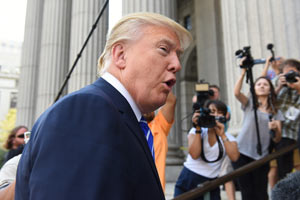 On Aug. 26, Mr. Trump visited Bloomberg's "With All Due Respect" to discuss his fiscal ideas for America.

The pressure was on Trump to do so - according to a CNN/ORC poll released on July 27, 44% of U.S. citizens listed the economy as their number one concern when it came to politics. And a few members of the "GOP Dozen" have already released their own financial proposals: Rubio, Christie, and Walker, to name a few.

Here's what the number one GOP presidential candidate had to say about Americans' number one concern...

Donald Trump Economic Plan Part 1 - Tax the Rich: Trump told Bloomberg that he would like to alter America's tax code. He proposed simplifying it and also targeting hedge fund profits, as they're taxed lower than typical income. Trump has said he will lower taxes for the middle class. In order to achieve this, he argued, the rich must be taxed. He added that he doesn't mind having to pay taxes at a higher rate, as a billionaire.

Donald Trump Economic Plan Part 2 - Get Rid of Corporate Inversion: "Corporate inversion" is a strategy businesses adopt to reduce their own tax burden. When corporate inversion occurs, a company is reincorporated abroad by a foreign business, which takes over all the assets and operations therein. According to Bloomberg, Trump's solution is to lower corporate taxes. This, he argued, will prevent American companies from being enticed by foreign labor. Right now, the United States has the highest corporate tax rate among major industrial nations, according to Cato Institute research published in September 2012. The U.S.'s effective tax rate of 35.6% on new corporate investment is nearly twice the average rate for the 90 countries studied.

Donald Trump Economic Plan Part 3 - Lower the Debt Ceiling: Trump was asked whether he would continue to raise America's debt ceiling. He said he shouldn't have to based on the "fat" already in Washington. He encouraged Republicans to carry on the fight against the issue. In 2011, the United States lost its AAA rating because of the stalemate between Republicans in Congress and President Obama over whether or not the debt ceiling should be raised.

Donald Trump Economic Plan Part 4 - Social Security and Medicare: Trump believes that Americans who paid into the system their entire lives deserve their due benefits come retirement. Although his position isn't entirely certain, according to an Aug. 28 report on CNNMoney, Trump proposed allowing members of the U.S. workforce the opportunity to invest a portion of their Social Security benefits in stocks and bonds throughout their careers.

Donald Trump Economic Plan Part 5 - Trade: According to an Aug. 3, 2015, MSNBC report, in Trump's book "Time to Get Tough," he stated he believes there should be a 20% tax on imported goods and a 15% tax on U.S. companies that outsource. According to a June 16 report in The Detroit News, Trump has also suggested slapping a 35% tax onto imported cars, especially those built in Canada and - you guessed it - Mexico.

BRB - Off to Delete My Entire Email Inbox: The Hillary Clinton email probe has hit a major nerve - even with her own party members. If the former first lady and current Democratic presidential candidate isn't careful, she could lose support from members of her own "family"...

Donald TRUMP should READ THIS AND RETHINK HIS PLAN TO WORSEN THE POVERTY MILLIONS ALREADY FACE.
http://moslereconomics.com/wp-content/powerpoints/7DIF.pdf

I like what Mr.Trump has to say i think hes correct in taxing the wealthy and giving the middle class a break

Part 2 is the absolute most important part of the DT tax plan. If we don't provide incentives, all the big corporations will leave. We also need to allow for some cash carry over from years to year. Small corporations are hit hard with this.

Part 5 is also important, as we should have done this since 1970.

The biggest thing we must do: is not hire a socialist to run a capitalist country.

Have a good day!

Donald Trump's plan is solid and it's about time somebody stands up to special interest, including big business loopholes. The tax code totally needs to be revamped and the burden of the National debt needs to stop strangling the middle class. Government needs to be reduced and the new age of entitlements need to be abolished!. Tine for Americans to start being accountable for the love of God! Go Trump! Time to make America great, again!

i dont like trump, but i like these economic statements, however he contradicts himself, and i dont trust him

Many major corporations pay minimal or no tax. There should be a limit in their deductions.

Corporations pay no taxes because they move all their capital and resources to overseas companies and don't report any profits in the U.S.

This is so perverted. The last thing the rich need is a tax cut. They need to pay some taxes! Lets call it an incentive to reinvest and grow. That's what happened before Reaganomics trickle down theory.

Remember Reagans lowering taxes for the rich, the end of the Industrial Revolution that channeled all profits to the rich with no incentive to reinvest in their business creating more jobs.