Apple stock doesn't do well in the periods directly before the launch of a new model of iPhone - a period we're in right now - but usually rises in the days and months afterward. 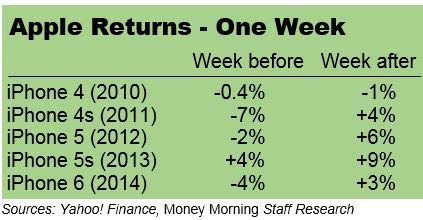 If the pattern holds again this year, now is when you want to buy AAPL stock.

Apple Inc. (Nasdaq: AAPL) is expected to launch the iPhone 6s (or possibly iPhone 7) at an event at San Francisco's Bill Graham Civic Auditorium on Wednesday, Sept. 9, a week from tomorrow.

Despite a torrent of rumors in the weeks leading up to any iPhone launch, investors usually take a wait-and-see approach with Apple stock.

The AAPL stock price has fallen in the week prior to the new iPhone launch in four out of the five previous years.

But investors must have liked what they saw. In all but one year, 2010, Apple stock was higher one week after the new iPhone launch. Several increases were surprisingly high for a single week, such as the 6% pop in 2012 and the 9% rise in 2013.

Two points: 1) The 3.81% drop to which you refer was a one-day drop on Sept. 25, 2014. 2) The article is about the period leading up to an iPhone launch, not when it goes on sale, which is typically a week to 10 days later. Last year the iPhone was introduced on Sept.9 and went on sale Sept. 19. What Apple stock does before and after a new iPhone first goes on sale would be a different article.