The last few weeks of trading have been downright rough…

The markets staged a "whistling past the graveyard" rally for a little more than a week after the Aug. 24 crash only to come tumbling down again by 3% on Sept. 1 as nearly every sector was hit.

Robust technical support levels that were years in the making have been snapped like so many little twigs.

Key indicators have all but failed traders who are scrambling to find bottoms to trade off of, and the Chicago Board of Options Exchange Volatility Index (VIX) has been breaking six-year records, topping 53 on Aug. 24 and 30 on Sept. 1.

The sheer breadth of the chaos is matched only by the growing chorus of pundits speculating on the drivers of the chaos.

Let them speculate and fumble around in the dark. What's really rocking this market is what I call the "Three Cs." 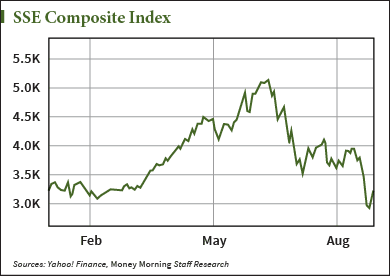 This is really where it all starts…

We know by now that poorly prepared Chinese retail investors leveraged themselves up to their collective eyeballs and laid their life savings on the line for a shot at becoming the next millionaire on the markets in Shanghai and Shenzhen.

Chinese regulators sure made it easy, with extremely slack margin requirements and an officially sanctioned ethos of greed. That drove the markets skyward in a classic case of "irrational exuberance."

In mid-June, the bubble burst and the Chinese markets have been bleeding ever since, despite ever more extreme measures by the Chinese government to prop them up.

Margin calls and losses are leaving those investors penniless.

At the same time, the Chinese economy appears to be slowing down – although it's still growing at almost double the rate of the United States or European Union.

Many investors' first clue of that was the People's Bank of China's move to devalue the yuan. It was a logical move to make, but many investors read it as a frantic move to boost exports and shore up the economy.

That "spooked" people and sent them selling – all too easy to do if you don't have the full story.

The Second 'C' Is… Commodities

So China is still posting enviable growth rates by Western standards, but there is a noticeable slowdown, and that's exacerbating a global decrease in demand for commodities – and I don't mean index or bond futures.

Some of these physical commodities don't really correlate with the economy, but most of the really important ones do – especially oil and copper.

Not only are those critical to actually building and moving things, they're a near-perfect gauge of the economy; oil drives the production side, and copper the consumption side. 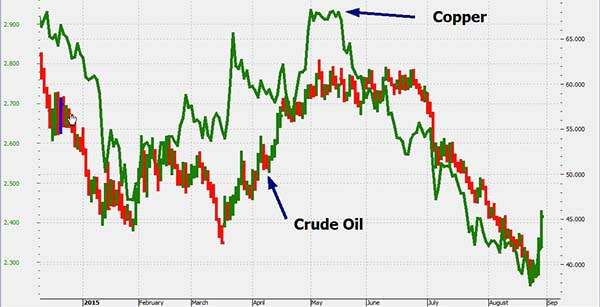 Crude oil tends to lead the charge up and down, with copper following the way as a confirmation for expansion and contraction of the worldwide economy.

Since China has the fastest-growing economy in the world, I like to use these barometers and tie them to the markets.

Thanks for the opportunity. As a small investor I need every bit of insight I can get. I just don't have the mega bucks for the big services. God Bless for your help!

Funny, we never heard back from you on how those Pandora September 16 Puts were doing.

Oh wait, I see … not too well. But in this market, you still have a shot at rescuing this dog of a trade. Good luck.

Good morning ladies and gents…I'm new here and looking forward to getting involved in some intelligent conversation in the future. Have a great upcoming Labor Day holiday!!!

Thank you all for the comments, and welcome Joe.

Fallingman, as for my column and suggestion on Pandora, nobody gets it right 100% of the time. That one went completely against me, but I am sure in the last few weeks theres alot of traders saying the same thing, only they probably risked more than 1.10 on their positions.

In this type of market, its best to worry more about your risk than potential rewards everyone. I expect these markets to continue with high volatility into October.