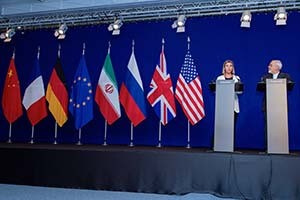 Maryland Democrat Barbara Mikulski became the 34th senator to support the deal on Wednesday, ensuring a landmark victory for the Obama administration.

Senator Mikulski's backing means at least 34 senators - the number required by the Constitution to sustain a veto - will back U.S. President Barack Obama's expected veto of a Republican resolution to disapprove the deal. The Maryland senator, serving since 1987, will retire at the end of her term.

Secretary of State John Kerry said the administration will keep pushing support for the deal beyond the 34 votes they have now "until the last moment." The Democratic administration is aiming to accumulate 41 votes, which would spare President Obama from having to use his veto power.
"Thirty-four votes are obviously enough votes for the president's veto to be upheld," Kerry told CNN. "That is not satisfactory for us. We do want to try to go further. We'll continue to persuade."

Kerry continued, "It's hard to conceive of a quicker or more self-destructive blow to our nation's credibility and leadership" than a vote against the agreement, known as the Joint Comprehensive Plan of Action (JCPOA).

The secretary of state also sought to dismiss myths about the Iran nuclear deal. He said rumors had begun to swirl "even before the ink was dry."

On the top of his list was the belief the Iran nuclear deal was based on trust.

"There is a not a single sentence or paragraph in this whole agreement that depends on promises or trust. Not one," Kerry said.

Kerry insisted Iranian compliance would be monitored by an unprecedented and hi-tech surveillance regimen installed by the UN nuclear watchdog, the International Atomic Energy Agency (IAEA).

Kerry claimed the deal would make the world safer - including Israel and the Persian Gulf states.

If you pass this bill, are of you backing Obama, who is an idiot, will never live to see the outcome of your stupidity but your kids and grand-kids will. I am asking you to reconsider for it will be the end of America as we know it. Obama had a mission when he was elected. That was to destroy all christian values, that most of us live by and to destroy the American values that I fought for, my Dad and his brothers fought for in WWII and replace it with his Muslim beliefs. Do you want to be remember in history as contributing to the demise of America?? Please do not pass this dangerous piece of crap, it does not warrant being termed legislation, for it will destroy America and it's true allies.

Obama and Kerry are both idiots. I know while we are at it lets print a few more trillion dollars so that we will all have a life time of toilet paper to wipe our butts with. What are all of you elected dummies doing? Oh I know, you are destroying what all of the men and women of what used to be a great nation have fought and worked for.
Israel is gods chosen people, support the Iran deal and we will really be screwed!!!