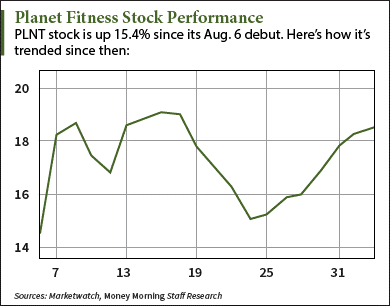 In the earnings report, Planet Fitness said it added 38 new locations during the second quarter. That brings the total number of stores to 1,014 as of June 30.

Should I Invest in Planet Fitness Stock Today?

With an ambitious expansion strategy and growing membership of more than 7 million customers, Planet Fitness stock could be a healthy investment down the road.

But we recommend holding off on buying Planet Fitness stock until after the IPO lock-up period ends on Feb. 2, 2016. The IPO lock-up is the period of time after a company goes public in which inside investors like hedge fund managers and venture capitalists can't sell their shares of the stock. It can last anywhere from three to six months after an IPO.

After the lock-up period ends, these investors sell their in-demand shares to retail investors like us and turn a quick profit. That causes us to buy in at an inflated price and miss out on the big gains the wealthy Wall Street investors already snagged.

Etsy Inc. (Nasdaq: ETSY) perfectly illustrates this skewed IPO process. The online marketplace company returned 87.5% on the first day and was considered one of the most popular IPOs of 2015 when it hit the market.

Since then, ETSY stock has plummeted 54.1% and is considered the worst IPO of the year. That means any retail investor who jumped in at those elevated prices is looking at hefty losses.

Waiting until the end of the lock-up is just one way for retail investors to safely play the tempting IPO market.

Here are two more rules to follow to ensure you get the most return on your IPO investments...

Alex McGuire is an associate editor for Money Morning who writes about initial public offerings. Follow him on Twitter at @AlexMcGuire92 for the biggest IPO updates.