It's a question that often comes up in times of market turbulence: What is a death cross? 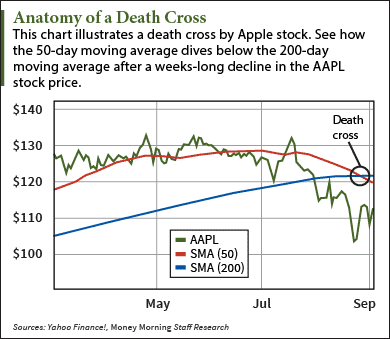 A "moving average" is just that - every day, the average price over the previous time period - such as 50 days or 200 days - is calculated and added to the trend line. It allows traders to view the price action of a stock or market index without the "noise" of day-to-day volatility.

The occurrence of a death cross results from a short-term decline deep enough to push the 50-day moving average below the 200-day average, indicating weakness in that stock or index.

That's the simple definition - but we know investors asking "What is a death cross?" need more than that to really understand what the death cross means for stocks...

You see, the foreboding name has made the death cross a favorite of financial news channels and financial headline writers. Whenever one occurs, it is duly noted in the financial media, which tends to spread fear unnecessarily among ordinary investors.

Many technical analysts dismiss the death cross entirely, along with its cousin, the golden cross. (A golden cross is when the 50-day moving average passes above the 200-day average, a bullish indicator.)

While a death cross is not an absolute sign of a stock market crash, investors should not ignore it completely.

To determine how much weight to give to the death cross, investors need to understand what it's really telling us. The answer lies in the historical data.

You won't get that from the talking heads on CNBC, though.

"In all of the death cross commentary I see on television and read on the Internet, there's never any mention of historical performance after a death cross. None! Just a lot of hyperbole about why we should be concerned," said Money Morning Small-Cap Specialist Sid Riggs.

That's why Riggs took it upon himself last October to analyze every instance of both the death cross and the golden cross in the Standard & Poor's 500 Index all the way back to 1950. Here's what he uncovered...

What Is a Death Cross? This Historical Analysis Tells the Tale

One thing Riggs learned was that using the death cross and golden cross to time the markets is a bad idea.

If an investor shorted stocks following a death cross in the S&P 500, and flipped the trade to a long position following a golden cross, she'd have a 4,455.44% gain over the past 64 years. Unfortunately, a buy-and-hold strategy would have returned 7,787.68%.

But the two indicators are pretty good at suggesting general market performance. Riggs measured market returns in the periods between a death cross and the next golden cross, as well as from a golden cross to the next death cross.
The "long periods" - those that followed a golden cross - had well-above-average returns of 17%. The "short periods" - those that followed a death cross - had well-below-average returns of -0.97%. Average S&P 500 returns fall in the 7% to 8% range.

The long periods were also much more likely to see stocks gain, which occurred 78% of the time, compared to just 25% of the time in the short periods.

How to Play a Death Cross

Riggs noted that the positive S&P 500 returns after a golden cross make it a good time to put money into stocks you had already targeted.

A death cross is a trickier proposition. Rather than try to short the market following a death cross, Riggs suggests that investors trade more cautiously, just in case.

"I would continue to establish positions - but I would shift my choices to more defensive choices," Riggs said. "Additionally, I would consider using a tighter protective stop, such as a 15% trailing stop. If the market does want to roll over, the tighter stop will result in smaller losses, leaving you plenty of capital to reallocate into new positions. On the other hand, if the death cross is just a head-fake, a 15% trailing stop will likely still afford you enough wiggle-room for your new (defensive) stock positions to absorb short-term volatility before powering ahead to new highs."

The American consumer should have the stock markets going gang busters. If the unemployment rate is 5.1 %, cheap fuel putting more dollars in the consumers pockets. The proof is in the markets, the federal government is laying to us about the real unemployment rate with some fuzzy math. Even with the strong dollar hurting larger companies that do business over seas, the smaller companies that do there business with in the united states should be doing great. The strong dollar should be helping the consumer when buying things made abroad. SO HOW IS THIS MARKET ACTING SO BADLY???