Conventional wisdom at the moment says that China's coming unglued and that the country's stock markets pose a grave danger to global investors. It's communist, it's a Ponzi scheme, it's ruled by insiders, it's leveraged up to its eyeballs, ghost cities... all the usual tired old arguments are being rolled out as if they're somehow new again.

In reality, the real risk isn't being reported. In fact, it's not even being talked about.

I want to focus on this disconnect today, because the China-bashing crowd is right about one thing - that country's current challenges definitely affect your money.

Just not the way most people think.

Here's what you need to know about China to properly (and profitably) position your portfolio.

The Great Fall of China... or the End of the Bling Dynasty?

The ongoing media narrative about China is as brutal as it gets, with legions of talking heads and mainstream pundits whipping up story after story about how the world's second-largest economy is coming unglued.

For example, author and China expert Gordon Chang, best known for his 2001 book "The Coming Collapse of China," noted on CNN recently that "China could be in the world's greatest depression and they would still report 7%." He's alluding to the fact that "everybody" knows Chinese economic data is manipulated.

The implication, of course, is that ours isn't - which is a lesson in irony if I've ever seen one - considering what our government's done to everything from employment figures to manufacturing input.

Meanwhile, well-known China bears like Jim Chanos have returned anew with cataclysmic warnings about why the Chinese market meltdown will mean the end of the financial universe as we know it. "Whatever you might think, it's worse," he told CNBC's "Fast Money" last August.

Never mind that he's an avowed short seller - and a good one at that - or the fact that people have been saying exactly the same thing about U.S. markets since March 2009, right before the S&P 500 took off on a generational 186% run.

A little perspective is clearly in order.

First, if China's market were really the global colossus the media's made it out to be, you can bet that our markets would have taken that into account years ago and shifted to the Far East accordingly.

But they didn't, and they won't for a long time to come.

Look at the following map, which depicts national boundaries commensurate with stock market size. It pretty much tells the story: 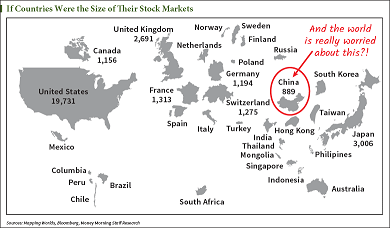 "But... but... they're really volatile," goes the thinking. The argument states that investors have no business setting their sights on the Red Dragon because our own markets are more stable.

Uh huh... on the heels of the wild 1,000+ point drop in the Dow seen on Aug. 24 and the following Wednesday's 619-point rocket ride higher, ask yourself if you really believe that. I don't.

No doubt Chinese stock markets can give investors a roller-coaster ride. In fact, they're the most volatile on the planet at the moment, after Greece.

But here's the thing: Chinese markets were still 30% less volatile than the maximum volatility achieved in the world's six major market crashes since 1929, according to Bloomberg: 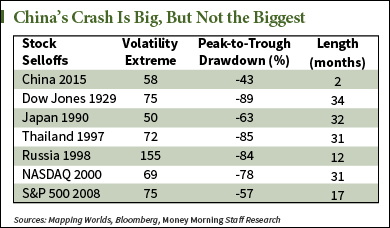 Let me break this down another way.

That map analogy is really stupid.

I need to know what to expect.

i 2006 I bought four bedroom apt in modern high-rise in Leshan overlooking biggest Budda in the world in Sichuan Province…. What about real estate market…?