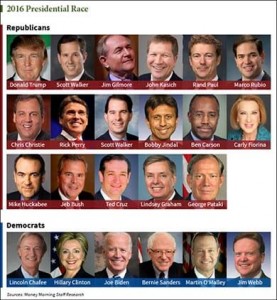 The race is on for 2016 presidential candidates. A wide field of 22 hopefuls - 17 Republicans and five Democrats (Vice President Joe Biden is anticipated to make six) - are busy vying for campaign donations.

Many traditional big-time celebrity political donors have not yet made a contribution in 2015. For instance, nothing from actor Morgan Freeman so far, according to a search of the Federal Election Committee (FEC) database. Freeman was the third-largest celebrity contributor in the 2012 election cycle, with more than $1 million given to Hillary Clinton's Priorities USA Action super PAC. And actor husband-and-wife team Tom Hanks and Rita Wilson, the seventh-largest celebrity donors that cycle ($173,231 to Democrats), are also yet to contribute.

But a few others have already picked their candidate favorites in the 2016 presidential race.

Here are ten of the biggest celebrities that have already donated in 2015...

10 Celebrities Who Have Donated to Presidential Candidates in 2015

One of the most famed and influential modern Hollywood directors, Steven Spielberg's films have earned $8.5 billion worldwide. This year, he donated $1 million of his earnings to Priorities USA Action - a single-candidate super PAC in support of former U.S. Secretary of State Hillary Clinton.

This was far from Spielberg's first political contribution. In fact, the democrat was the top celebrity contributor in the 2012 presidential race according to OpenSecrets.org. He put up a whopping $1,294,000 in support of U.S. President Barrack Obama.

Two-time Golden Globe Award-winning actor Leonardo DiCaprio is a committed environmentalist and avid member of the Democratic Party. He contributed $2,300 to Obama's 2008 presidential race - that year's max amount a single person was allowed donate to a campaign in a single election cycle.

Action film hero and martial artist Chuck Norris is in former Arkansas Gov. Mike Huckabee's corner. The "Walker, Texas Ranger" star supported Huckabee in 2008 and is doing so again in the 2016 cycle.

Norris has said he is impressed with the other Republican presidential candidates, but believes Mike Huckabee has an outstanding ability to communicate with both liberals and conservatives.

Professional wrestling promotor Vince McMahon is the owner, chairman, and CEO of World Wrestling Entertainment (WWE). He's worth a whopping $1.05 billion currently, according to Forbes.

The Republican donated $360,360 in the 2012 election cycle to Restore Our Future, a conservative super PAC in support of Mitt Romney (R). This year, he likes New Jersey Gov. Chris Christie (R). McMahon chipped in $5,000 toward Christie's super PAC Leadership Matters for America.

Singer, songwriter, and record producer Beyoncé is one of the best-selling music artists of all time. A 20-time Grammy Award-winner, Forbes recently named her the most powerful female musician of 2015. The site puts her current net worth at $54.5 million.

Beyoncé, along with her famous rapper husband Jay-Z, were active fundraisers for Obama's 2008 and 2012 campaigns. This election cycle, "Queen B's" support is going to Hillary.

Hollywood sweetheart Reese Witherspoon's breakout role came in 2001 when she starred in "Legally Blonde." She earned an Academy Award for Best Actress for her portrayal of June Carter Cash in "Walk the Line" in 2005.

The actress donated to Hillary Clinton's Senatorial campaigns in 2003 and 2005, so it'll be no surprise to learn she's donated to the former first lady's presidential run this year.

Two-time Academy Award-winner ("Good Will Hunting," 1997; "Argo," 2012) Ben Affleck has come out in support of President Obama, John Kerry, and Al Gore in the past. In the 2016 presidential election, he has thrown his support to Hillary Clinton.

Powerhouse singer and actress Barbra Streisand is known to give away vast sums to Dems every election cycle. She has done so for decades, even in smaller midterm elections.

With an estimated net worth around $340 million, Streisand has donated to Hillary Clinton in 2015.

That's right. The GOP nominee hopeful has made a few political donations himself this year...

The Politics Behind $250 Million: As of Aug. 31, election campaign contributions for the 2016 presidential election totaled roughly $250 million. That's the amount coming from super PACs, PACs, 501(c) Groups, campaign committees, and more. Here's a breakdown of the cash each candidate has brought in so far from these sources...