The world is awash in debt, and it's simply unsustainable. As worldwide debt levels keep setting new records, there's no chance anyone will ever be paid back.

The world's central banks now have an insurmountable dilemma: Raising interest rates will just increase the repayment burden. Keeping them low will only inflate the debt bubbles all over.

The sovereign debt crises we've seen over the last six years have triggered major sell-offs, but odds are high this $200 trillion global problem could start the mother of them all.

But I'm going to show you how to make a killing as the bill comes due...

Government Debt Is the "Bubbliest" of All 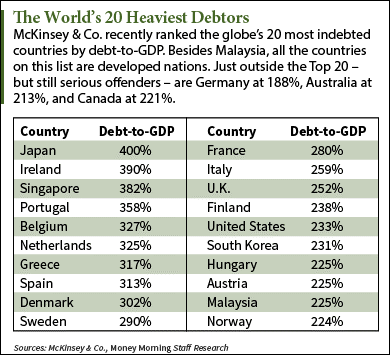 Global debt has mushroomed by $57 trillion since the financial crisis, and that's only up to the end of 2014.

You can see that government debt, mostly accrued in an effort to stimulate the developed world's floundering economies, accounts for the lions' share of this astronomical bill. 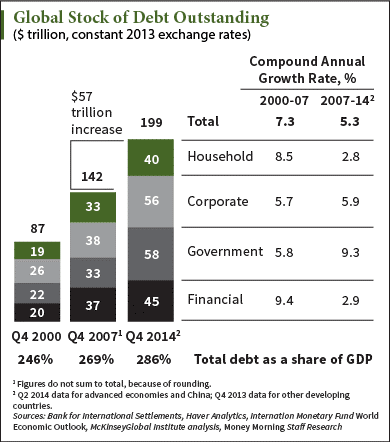 And how have we benefitted? We haven't.

Economic output has clearly not kept pace with all this extra debt.

Even St. Louis Fed Vice President Stephen D. Williamson admitted in a recent white paper that the theory behind quantitative easing (QE) is "not well-developed."

He suggests that empirical support for Bernanke's view on how asset purchases affect outcomes is "mixed at best."

Williamson considers all the relevant research to be problematic and says that "there is no way to determine whether asset prices move in response to a QE announcement simply because of a signaling effect, whereby QE matters not because of the direct effects of the asset swaps, but because it provides information about future central bank actions with respect to the policy interest rate."

No research has established a link between QE and the goal of inflation and the stimulation of economic activity.

Japan is perhaps the best example for this phenomenon, given its head start on multiple lost decades in its stock market and dire demographic outlook.

That was proved when its central bank went "all-in" to once again try and kick start economic activity through a mega-QE program at a mind-blowing pace of $712 billion annually, announced last October.

Sorry, Abe and Kuroda; inflation in your country was still at zero in July over the previous 12 months, well below the official 2% target.

There's No Way to Pay the Debt Back

In my view, there is major risk of a knock-on effect from all this accumulating debt. The biggest risk could come in the form of another sovereign debt crisis.

Grantham gave advance warnings for both the 2000 and 2008 market crashes and thinks the United States is just asking for another such event - as soon as next year.

With my son being a fiter pilot i have seen the movement of the government screwing up our military. I like Trump, Ben Carson because it takes a team to run this madness, maybe they can get it done.

How are they responsible to make unbelievable money for its investors.