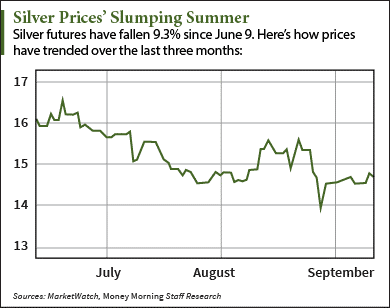 The silver price per ounce today (Wednesday) fell into the red as the investors await next week's Federal Open Market Committee (FOMC) meeting.

The decline in the silver price per ounce today comes ahead of the FOMC meeting starting on Sept. 16. The two-day assembly will determine whether the U.S. Federal Reserve will raise interest rates for the first time in 10 years.

The days leading up to these meetings typically leave precious metal traders on edge. If the Fed decides to hike rates, it would boost the U.S. dollar and dollar-denominated commodities like silver. If the Fed decides not to raise rates, it could cause a huge sell-off and send the silver price per ounce even lower.

"It would be totally irresponsible for the Fed to raise rates right now," Fitz-Gerald explained in an interview on Kitco News. "You got weak China, weak data, weak consumer, an American public that's been absolutely eviscerated."

Is Silver a Good Investment Today? Silver has had quite a lackluster year so far. In fact, prices for the metal have tumbled 7% in 2015. But that doesn't mean silver can't add value to your portfolio. Here's how we can play silver right now…