The latest data out of China today shows China's inflation is rising. However, it's China's deflation risks that have everyone talking. 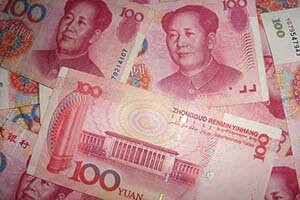 The National Bureau of Statics said today (Thursday) that China's consumer price index (CPI) rose 2% year over year in August and reached a one-year high. The rate was a notable jump over July's 1.6% rise. It also topped consensus forecasts of a 1.8% to 1.9% rise.

But it was a 3.7% surge in food costs that was responsible for the CPI's increase, not improving economic activity. The cost of fresh vegetables jumped 15.9% last month, and pork prices climbed 19.6% from a year earlier on cramped supply.

While the latest CPI number was a marked improvement both month over month and YOY, China's central bank will still likely proceed with additional monetary easing. That's bullish for markets.

"Despite the pickup, the CPI figure still is not a threat for Beijing to change its policy stance, especially when factory-gate prices remain in the deflationary territory," Fan Zhang, an economist with RHB Research, told The Wall Street Journal. "China's central bank is expected to keep easing its monetary policy throughout the year."

But here's why all the buzz is focused on deflation in China...

China's Inflation Overshadowed by These Numbers

The country's producer price index (PPI), measured as goods leaving factories, slumped 5.9% YOY in August. That missed expectations of a 5.5% decline and was worse than the 5.4% slide in July. August's dismal PPI showing marked the 42nd straight month of declines.

China's manufacturers slashed prices at the fastest pace in six years in August amid lower commodity prices and waning demand. Both signal persistent deflationary risks and have stoked expectations for additional stimulus measures from the People's Bank of China.

With the PPI remaining negative for more than three years, here's what economists are saying about these latest numbers...