For Sept. 10, here's how the Dow Jones Industrial Average did today, earnings reports, top stock market news, and stocks to watch based on today's market moves… 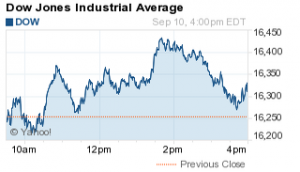 The Dow Jones Industrial Average today added 76 points as shares of Apple Inc. (Nasdaq: AAPL) rallied after hedge fund manager Peter Tepper told CNBC that shares of the tech giant were trading at a bargain. Apple stock was up more than 2% today; however, Tepper is a little late to argue that AAPL is a great buy. Yesterday, we outlined why Apple stock was a must-own holding in your portfolio after the company's product event in San Francisco. Read all about it right here.