The Fitbit stock price has seen a massive lift over the last week. 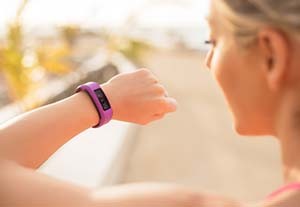 Morgan Stanley's rating came after research showed a shrinking customer base for the Apple Watch. According to the bank's AlphaWise survey, consumer purchase intention – which measures a person's favorability toward competing products – of Fitbit trackers rose from 15% in May to 17% in July. Meanwhile, the Apple Watch's consumer purchase intention decreased to 20% over the same period.

While many investors expected the Apple Watch to run Fitbit out of business, the opposite has happened. In fact, Fitbit's sales only dipped during the months leading up to the Apple Watch's April 24 release.

Apple stock has also been struggling, down 8% in the last month. It slumped another 2% yesterday after the company held a huge unveiling event for a new line of products.

Fitbit clearly has the edge on Apple in the wearable tech market. But that doesn't necessarily mean you should dump your money into Fitbit stock right away.

Questions about Fitbit stock or the tech sector? Talk to us on Twitter at @moneymorning.