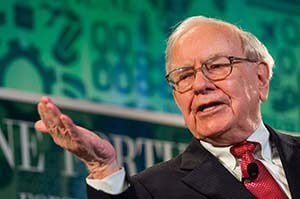 A sound off from Warren Buffett on Trump's economics: "In terms of policy, I haven't heard [Trump] say anything yet that I disagree with."

Last week saw the release of Donald Trump's economic plan for America, which included the elimination of a tax code rule that allows investment managers to pay lighter taxes. Specifically, this loophole makes it possible for these managers who get "carried interest" to treat their profits as capital gains, which are taxed significantly lighter than wage income.

The Oracle of Omaha has been rather vocal about his politics recently. After verbalizing his approval of Trump's tax code reform, Buffett stated that he supports Hillary Clinton for president.

And before praising Trump's tax policy in the Bloomberg interview, he told CNBC the same day that he admired Democratic presidential hopeful Bernie Sander's campaign for taking on the super-rich. But while he agrees with Sanders on the need to help those left behind by the market economy, reported Business Insider on Sept. 8, Buffett strongly disagrees with him on the production side.

He's a Clinton man, through and through.