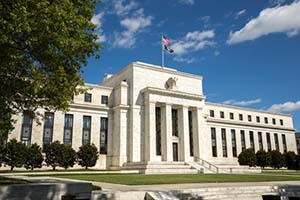 The U.S Federal Reserve will hold a two-day policy meeting next week on Sept. 16 and 17, and the biggest decision will be whether to impose an interest rate hike.

And that has investors wondering what type of impact an interest rate hike would have on stocks.

It seemed all but guaranteed an interest rate hike would happen in September until last month's volatility hit. Following concerns about China's stock market, the Dow Jones fell 13.4% from July 20 through Aug. 25. The Nasdaq and S&P 500 were down 13.5% and 12.2% in the same time frame, respectively.

That has led to disagreements among Fed officials on when to raise rates, according to The Wall Street Journal.

Now, the Federal Reserve has entered into its self-imposed blackout period. That means officials have cut off communication with the media until the meeting begins.

Many investors are worried that an interest rate hike will have a severely negative impact on the stock market.

But according to Money Morning Capital Wave Strategist Shah Gilani, investors shouldn't panic about their stock holdings ahead of the Fed meeting.

How an Interest Rate Hike Could Impact Stocks

Whether the Fed decides on an interest rate hike next week, during the October or December meeting, or sometime in 2016, Gilani says the reaction from stocks should be muted.

"There shouldn't be too much of a market reaction to an interest rate hike," Gilani said. "A rate increase of 0.25% in the Fed funds rate has already been talked about for so long that it's mostly baked into prices now."

As Gilani points out, any raise in the interest rates will be a small one - likely 0.25%.

"And beyond that 0.25%, there's no need to hike further," Gilani said. "The Fed isn't going to destroy the wealth effect it's engineered by doing something stupid to trounce stocks. That said, there is a chance investors could look at a rate hike as a profit-taking opportunity and sell stocks. But this won't be a market buster."

A small pullback certainly could happen, but it's definitely not a reason to panic. And if the Fed should raise rates a second time, that's actually a good thing for the markets.

"The thing to remember is that after the initial rate hike, which is a matter of Fed credibility at this point after telegraphing it for so long, any additional rate hikes will be because we are growing nicely. That's a good thing for stocks."

The Bottom Line: As the Federal Reserve decides on an interest rate hike, investors are wondering what impact there could be on stocks. According to Gilani, we could see a small pullback in stocks as investors take some gains. But this won't be a reason to panic. And any additional rate hike will be good for the markets.

Not so much in the USA, but what about around the world? Remember, every country that tried raising interest rates since the financial crisis has had to lower them again, including Canada….