Donald Trump Net Worth: Donald Trump, the current frontrunner in the crowded GOP run for the White House, is estimated to have net worth of $4 billion.

According to Forbes estimates, Trump's net worth quadrupled from $1 billion between 1988 and today. However, Trump disputes independent appraisals of his wealth and maintains a net worth of $10 billion.

Trump was one of 1,645 people who made Forbes' 2014 billionaire list, representing a combined wealth of $6.4 trillion. 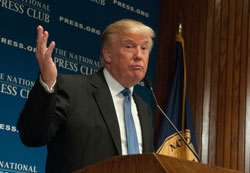 While Donald Trump is one of the wealthiest men in the world, his net worth growth over the last 27 years pales in comparison to the wealth generated by other billionaires. Indeed, iconic investors such as Berkshire Hathaway Inc.'s (NYSE: BRK.A) Warren Buffett and Microsoft Corp.'s (Nasdaq: MSFT) founder Bill Gates have enjoyed jaw-dropping net worth growth.

While he may trail other billionaires, Trump is by far the wealthiest presidential candidate. The second-richest candidate is Carly Fiorina with $59 million. Jeb Bush is third with an estimated net worth between $19 million and $22 million.

As Trump heads into the second GOP debate tonight in California, where 11 Republican hopefuls will compete for the party's nominee, a fresh CBS News poll shows Trump leads the national polls with 27%. That's up from 24% in August.

But neurosurgeon Ben Carson has significantly narrowed the gap. Carson is a close second with 23%. That's up substantially from 6% in August. Jeb Bush, Mike Huckabee, and Marco Rubio round out the top five.