The continuing swoon in crude oil prices, combined with a rapidly advancing crunch in energy debt, has once again ushered in expectations of a merger and acquisition (M&A) cycle among oil companies.

The first indication that such a cycle is underway came a week ago... in Australia.

One of that country's leading oil producers proposed a merger with another in what would be one of the largest energy M&A deals ever seen "Down Under." Woodside Petroleum Ltd. (OTCMKTS ADR: WOPEY) announced an all-stock deal valued at more than $8 billion ($11.64 billion AUD) for Oil Search Ltd. (OTCMKTS ADR: OISHY). The merger would create one of the dominant players in the Australian market. Oil Search initially rebuffed Woodside's offer but talks continue.

Before the dust settles, we are going to be seeing a lot more of these moves. So far, interest has centered on the American oil sector. But the Woodside-Oil Search development makes it abundantly clear that the next M&A wave is going to have a far more expansive impact.

Here's what that means for the oil industry... and how we'll profit from it...

Why the Oil Industry Is Consolidating 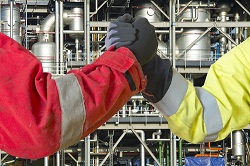 Now, this M&A wave should hardly catch us by surprise. After all, we've amply discussed this topic in past issues of Oil & Energy Investor. Through the first week of this month, the global dollar amount of deals reached $321 billion, a total that eclipses the previous record of $228 billion set for the entire year of 2010 and more than twice the amount during the same period in 2014.

Of the total, the bulk has been in the United States, with almost half of the dollar amount thus far this year centered there.

For some, the current climate is reminiscent of the 1990s, when huge mergers occurred putting together the likes of BP Plc. (NYSE ADR: BP), Arco and Amoco, Chevron Corp. (NYSE: CVX) and Texaco, Exxon and Mobil.

But this time, it is going to be the total volume of smaller deals that will provide the real texture of this unfolding shakeout. It has all the earmarks of one of those sector-changing events that only hits every other decade or so.

That does make it more difficult for "asset shoppers" to decide what to buy, since it requires a greater sophistication in reading the smaller imprints of companies that tend to operate only in certain locales or basins. Nonetheless, many billions of dollars have been assembled by hedge funds and similar players in anticipation of a fire-sale mentality building up. They are just not quite comfortable moving beyond the main deals.

In the United States, for example, anything much below the $3.7 billion acquisition of Rosetta Stone Inc. (NYSE: RST) by Noble Energy Inc. (NYSE: NBL) is a difficult read for analysts with experience largely in other market segments.

The problem often comes down to understanding the rationale in advance of the M&A market move.