For Sept. 17, here's how the Dow Jones Industrial Average did today, earnings reports, top stock market news, and stocks to watch based on today's market moves… 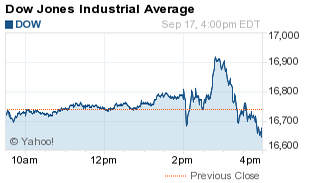 The Dow Jones Industrial Average today (Thursday) slid 65 points today after the U.S. Federal Reserve announced that it was not raising interest rates from its record-low level. The central bank has kept interest rates near zero since 2006 and said a further delay is required due to concerns about weakness in the global economy. The final vote was 9-1 to maintain its monetary policy.

According to notes from the Fed Open Market Committee, which concluded its two-day meeting on monetary policy this morning, four members of the committee said they do not support an interest rate hike until after 2015. The central bank will have two more meetings this year, Oct. 27-28 and Dec. 15-16. Given that the Fed will not hold a press conference in October, pundits believe the move will happen in December. However, as Money Morning Capital Wave Strategist Shah Gilani explains, the small rate hike that has been considered now for a year has largely been baked into the markets.

While the Fed sees stronger job growth in the United States, it remains disappointed by low inflation levels. Meanwhile, economic concerns around the globe continue over slowing growth in the Chinese economy. This morning, Japan reported weak export levels and a downgrade from Standard & Poors, signaling continued weakness in the Asia Pacific economy.