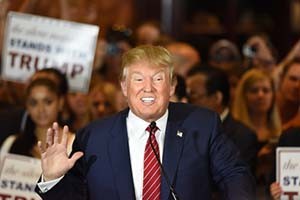 How did Trump do in the debate Wednesday night?

The verdict depends on personal attitudes toward the blunt Republican front-runner. But what's clear is Donald Trump's bombastic persona hasn't changed since the first GOP debate.

Trump and 10 other candidates took the stage at the Reagan Presidential Library in California for the second round of Republican presidential debates. The forum focused on China, the Iran nuclear deal, same-sex marriage, immigration, Planned Parenthood, and Sept. 11.

Trump began the debate by immediately berating Kentucky Sen. Rand Paul. After CNN moderator Jake Tapper asked Trump to respond to Carly Fiorina's statements about him being a "wonderful entertainer," Trump ignored it and addressed Paul's polling numbers instead.

"Well, first of all, Rand Paul shouldn't even be on this stage," Donald Trump said. "He's number 11, he's got 1% in the polls, and how he got up here, there's far too many people anyway."

When Tapper pressed Trump about Russia-Syria relations, his response was that he would have a friendly diplomatic relationship with Vladimir Putin. He explained how, if elected, he would get along with China, Mexico, and other world leaders that U.S. President Barack Obama isn't getting along with.

"We don't get along with anybody, and yet they rip us left and right," Trump said. "They take advantage of us economically and every other way."

Carly Fiorina, who joined the main debate stage for the first time last night, wasted no time addressing Donald Trump's past misogynistic remarks. In an interview with Rolling Stone, Trump said in reference to Fiorina, "Look at that face. Would anyone vote for that? Can you imagine that, the face of our next president?"

When asked about the interview, Fiorina quipped, "I think women all over this country heard very clearly what Mr. Trump said."

Then Trump got to his favorite topic of the night...