The U.S. Federal Reserve's two-day policy meeting ends today (Thursday). Everyone wants to know if the Fed will raise interest rates for the first time since 2008.

Fed Chairwoman Janet Yellen has been hinting for almost a year now that it's time to raise rates. Investors fear it would mean a major correction in stocks - and tanking gold prices.

The thinking is that higher interest rates make stocks and gold less attractive since they compete with bonds for investment dollars. Higher rates should mean new bond issues are suddenly more desirable.

Since gold pays no interest, a low or negative interest rate environment makes bonds more attractive. Or so the thinking goes. 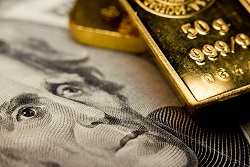 But in reality, the opposite tends to happen.

Several decades of data show that when the Fed transitions from low or descending rates toward rising rates, gold actually gains.

In fact, gold tends to gain a whole year ahead of a rate increase. On average, gold prices rose an amazing 20% in the 12 months preceding higher rates.

Take a look at the following example - which also happens to be the most recent one...

When Interest Rates Rise, So Do Gold Prices

Starting in June 2004, through a total of 17 individual hikes, rates went from a low of 1% to a much more hawkish 5.25%. The Fed thought the economy was at risk of overheating and wanted to normalize rates.

Typically, average investors would have expected gold to be utterly smashed. Since gold pays no yield, demand for the precious metal should have fallen.

The result was the total opposite.